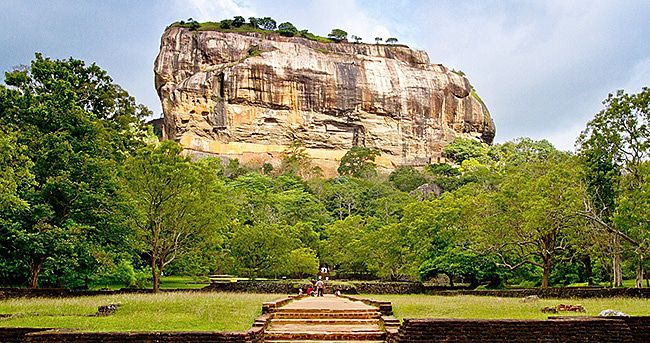 In a Tamil village, I heard loud music as a truck passed by. The truck had a palm tree protruding from the front at a 45° angle. The palm tree had a shirtless man hanging from it, hooked through the skin of his back and his legs. I thought the hooks would break through the stretched skin.

He swung back and forth continuously, a long piece of cloth tied to his feet pulled by a guy on the truck. It’s a form of praying. Look liked agony, but somehow his features were calm.

The soles of my feet were ballooned with blisters from walking barefoot on the hot stone of the hilltop temple the day before. My ankle hurt from a few weeks back. But after seeing the hanging man, I was embarrassed by my discomfort, ashamed by the doubts I had about climbing 180m Sigiriya. Sure there are 90 year olds climbing Croagh Patrick barefoot every year, or so I’ve heard.

We stopped for lunch before arriving at Sigiriya. A hefty buffet: 7 different types of curry, and I ate them all.

When I travel, I sometimes joke about how badly prepared I am. When I arrived in Sri Lanka, I thought I looked funny wearing shorts with black Oxford shoes; “oops forgot my runners, haha!” It didn’t seem so funny anymore at the base of a vertical rock face.

Walking on my tip toes to avoid the blisters, I began the 2 hour ascent. The driver wanted to join me on the hike; a leisurely stroll for him, no doubt. He seemed to enjoy the conversation. He was certainly talkative. But at the base of the rock, he got some bad news on the phone, his dog is dying. He seemed sad, but it didn’t make him talk less.

At 200 steps, I considered that it might not have been a great idea to do the climb in the early afternoon, with no hat or sunscreen.

At 400 steps, I realised that I had forgot to bring water. Driver didn’t bring any either, and no, there was no shop on the way up. The sun was hot.

At 600 steps, I remembered that I was afraid of heights. Driver kept pointing out landmarks on the horizon. Sometimes my gaze would instinctively follow his gesture and I would feel like puking.

At 800 steps I read the sign: “do not make noise or you will be attacked by killer wasps”. I started to wonder if I was in an Eli Roth movie. Where am I supposed to run to if these wasps come after me? I asked the driver to stop talking. I pretended it was because I didn’t want him to wake the wasps.

At 1000 steps the stench hit me. It took me a few minutes to figure out that it was this rock was drenched in monkey piss. 7 curries churned in my stomach.

At 1200 steps, the driver’s dog died. I wanted to pass on my condolences but was too parched to speak, and too intent on each careful step of my blistered feet, in their stupidly inappropriate shoes. Worried about stumbling again on my bad ankle because who could carry me down from here if I can’t walk?

I wish I could say that I felt victorious when I reached the summit, but the only thing that mattered was finding some shade. There was one miserable tree, casting the most miserable mid-afternoon shadow. And every square centimetre of it was taken up by Chinese tourists preparing for selfies. Not that they needed any preparation, because none of them had a bead of sweat on their brow nor a hair out of place. I wondered if they had been dropped off by helicopter. When they saw the state of the creature hobbling towards them, they took pity and cleared enough room for me to collapse on the shady grass. I closed my eyes, imagining that there was music playing, and I was suspended from a palm tree, gently rocking back and forth in the breeze with a smile on my face.

I did not prepare at all for my trip to Kathmandu. I didn’t even have local currency for the visa on arrival, the credit card machine didn’t work, and the ATM didn’t work. Not the first time I’ve had to beg and barter with strangers to... Continue →