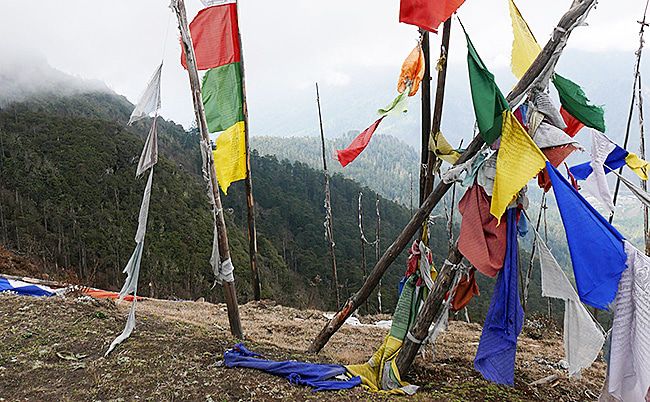 The blue poppy grows at an altitude of 5,000 metres. My guide gestures triumphantly, congratulating me on encountering the rarest of Himalayan flowers. For a second, I believe him. But we’re only at 4,000 metres and I’m fairly certain that the little purple plant is just some kind of primrose. Does he know that? He has told me several times on this trip that he is a real Bhutanese, therefore he doesn’t lie. But I’ve already caught him out a few times. I crouch down and snap a photo with feigned enthusiasm. I don’t let him know that I know, but I think he knows.

I’ve experienced this before. Deep in the Sundarbans of Bangladesh, gliding on a slipstream off a slipstream, the stifling silence of the swamp was violently severed by a guttural roar. For a second, we all froze. The ranger, who had spent his day dozing on the deck, snatched his rifle: “Bagha!”. The nature spotter bolted upright and sharply uttered the one word that had been on our minds all week: “Tiger!”.

I glanced at my Dutch travel companion, and from the quizzical look in his eye I knew he shared my skepticism. The man-eating tigers of the Sunderbans are the most bloodthirsty in the world, in the olden days killing up to 50 people per year, mostly seasonal workers from the city who come to the jungle to harvest honey (I guess they drew the short straw). But unless this tiger had laryngitis, this was clearly a barking deer in distress. Nonetheless, we played along. We touched down in the mangroves, mud crabs skittered in all directions, and we marched resolutely towards the source of the roaring which became more and more cervine as we approached.

Does the blue poppy even grow up here? Or is there some divine madman in a mountaintop monastery planting a few specimens for a laugh. Are there still tigers in Bangladesh? Or do the forest rangers carry around a stuffed tiger foot to stamp in the mud every now and then. Does it even matter?

In my youth, as an oft-emptyhanded fisherman, I was well trained in self-deception. “Clearly a pollack on the line, seaweed cannot produce such a jerky motion”, I told myself a thousand times. And yet, every chance I got I was out there on the rocks, my eyes glued to the rod tip as it slowly nodded its approval, catching kelp.

And I can still feel the lump in my throat that day, in the mangroves, and the grip of anticipation that tightened as we edged closer towards a man-eating Bengal tiger.

And I can still recall the stiff Himalayan breeze, the smell of mossy heather and musky mountain pikas that scampered under the rocks as I passed, my eyes scanning intently for an invisible blue flower.

Forget about werewolves, asteroid collisions, killer clowns and demonic possession. The scariest thing on the planet is a fungus. It grows high in the Himalayas. It is a parasite that latches onto a caterpillar. It slowly infects the... Continue →