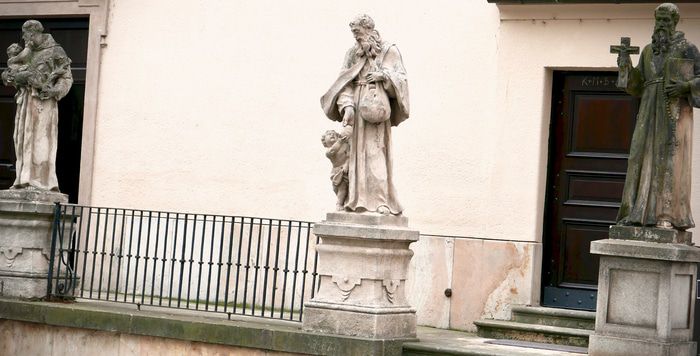 I got off the train at Brno. Grabbed a hot dog and I waited for a taxi. The second biggest city in Czech Republic, surely there are taxis, right? At the train station? The hot dog turned into a cup of coffee and a kastany bar. Still no taxis nor any form of public transport.

So I started walking towards the city centre, dragging my luggage (which hopped and staggered awkwardly due to its missing wheel). It’s times like these I miss having a smart phone. No taxis along the way, in fact, the streets were practically deserted. No families waiting on bus stop benches. No old guys smoking cigarettes outside of newsagents. I don’t know what I was expecting from Czech Republic, but I kind of assumed there would be loads of silent bearded old folk smoking outside newsagents wearing flat caps and drinking pilsner while pondering existentialism or life as an insect.

I’m not a nervous traveler, but on these empty streets the question of personal safety did cross my mind. This country has provided filming locations for a lot of movies in recent years. But they do not film romantic comedies here. This is where you come if you want to make a movie about cannibalistic serial killers, kidnapping and torturing tourists, hunting vampires. Hannibal Rising, From Hell, Van Helsing, The Brothers Grimm, and, of course… Hostel. (Which must have been a set back for tourism in this part of the world?) I picked up the pace. But my crippled luggage struggled to keep up: its wheezing, bumping, and scratching echoed off the cold medieval stone walls. I felt like a surfer with an open wound wondering when the sharks would arrive.

All travellers know, as a rule, if you need to find someone who speaks English in Central Europe, you should go to a kebab shop. (Or maybe that rule didn’t exist and I just wanted an excuse to eat a kebab, despite still being full from hot dog and kastany bars?) In any case, the kebab vendor I found could manage a few words of English, but was not from around here. I told him to ask the ladies in the kitchen. They are Russians and can’t even speak Czech, he assured me that they know nothing. But he was generous enough to pull up Google Maps on his phone and send me on my way with a vague set of directions. Find a big church and turn right. I soon learned that there are many big churches in Brno. By the time I reached my destination, I had given myself a thorough tour of the town centre.

Brno has a number of popular tourist attractions, most of which are literally underground.

The Ossuary under Church of St James, where you can see the skulls and bones of 50 thousand people arranged for display in an orderly manner.

The 10-Z Bunker, a nuclear fall-out shelter, where you can explore tunnels used by Nazis, see furniture used by Hitler, view cells where they kept prisoners, check out some gas masks.

Labyrinth Under the Vegetable Market, where they detail the many methods of execution and torture that were used here. Including the “madman’s cage”, designed for discomfort (cannot stand up, cannot sit down), where people with mental disabilities or illness would be locked up and displayed in the town square.‘

The Capuchin Crypt, where you can see the mummified remains of friars lying down, head resting on a stone pillow, boney arms folded over their chest. The chilling inscription warns “Tu fui, ego eris”; What you are now we used to be; what we are now you will be.

By the time I got to my hotel, I was well primed and resigned to the fact that I would soon be getting tortured and butchered. Apparently I was the only guest, and the check-in experience would have made Eli Roth proud. I got to my room and my luggage collapsed onto the floor, exhausted. I took a shower to wash off the stench of death. The hotel towels were neatly arranged, but stuck together somehow. With two hands, I unfolded the towel… only to find that it had been soaked through with blood.

Now I am a Boiled Prawn

Writing this post is a sensitive task for me. Every word I type causes painful feelings. Not for any sentimental reasons, but because each keystroke sends a shiver of discomfort through my sun-charred, aloe-vera soaked arms. My back and... Continue →