From the rocky shore of Issyk Kul lake into the Tien Shan mountains the scenery is diverse and stunning. Apricot orchards near the lake, proud ranks of birch trees and clusters of ancient walnut lead towards red sandstone canyons with warped martian columns. Clay hills, forests of juniper and spruce open up to reveal the famous grassy steppes, dotted with horses for miles.

Continuing upwards, the air becomes cold and harsh along with the terrain. Up, beyond the raging white rivers teeming with trout. Beyond the last of the cattle, grazing horses and the occasional bactrian channel. Past forgotten glaciers lodged in the folds of the mountains. Going up, until there’s nothing left for sheep to eat. Grey, featureless, windswept, barren and bleak. It’s a different kind of beauty, and this is where the eagles live.

Tian Shan mountain range appears to be endless. Especially today. Two days on a horse, trying to ignore the excruciating pain in my knees. Looking forward to my next break, but also dreading it, because it means I’ll embarrass myself getting back on the horse.

We put the eagle down on the grass and he waits patiently, still wearing his leather cap because there may be sheep nearby. What a beast. Adamantium beak and talons like a Gurkha’s knife. Heavy as a 6kg bag of rice. 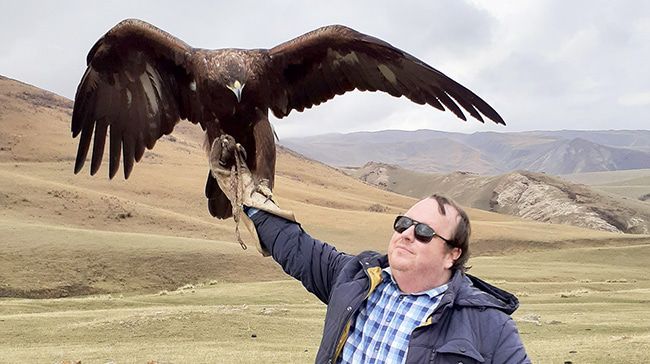 Eventually the last of the lonely farm houses disappears behind us, and we enter a new territory. It feels like a Tarkovsky movie up here. And it’s freezing. The stiff wind numbs your ears, sounds are distant and muffled so you don’t feel like talking. Or maybe that’s the solemnity of the landscape having an effect.

The hunter goes up to the top of the ridge and rides along. He knew I didn’t have skill to get my horse up there, and I was glad that he didn’t encourage me to try. He set the eagle loose, using his own binoculars from time to time. For the first hour, not so much as a mouse. I found it hard to believe. We could see all the way to China from here, how could there be nothing moving?

Until a fox made an appearance. The eagle swooped with such ferocious intent that it felt like there was no way it could miss, and its target would surely be obliterated by the impact. The hunter gave chase but didn’t find anything. He spent the next 30 minutes zigzagging the ridge, baffled, looking for the body of a fox, dead or alive. I sat down on the least uncomfortable chunk of frozen rock I could find and stretched my legs, thinking of the long descent.

Driving from the airport to the city, I was struck by the sudden realisation that there were few houses and lots of trees. Why the hell did I bring my family to Helsinki? I’ve stayed in some very bleak places in the middle of nowhere in... Continue →