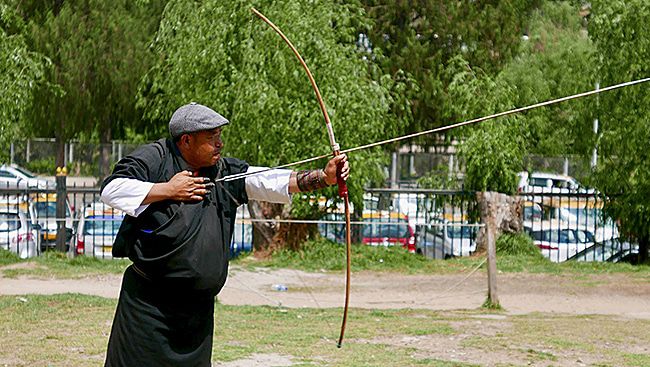 I’ve done archery before but not like this. Each person shoots two arrows that disappear into the horizon, at least as far as I can see. Then they set off on a long journey to the other side of the field to see if any of them hit the ridiculously small target. Then they turn around and shoot two more arrows back in the direction they came from. A winner is declared when a certain number of points are scored, or when they all stop codding themselves and agree to go home for dinner.

Bhutanese people also like a game called khuru, which is similar to darts but more heavily weighted and again played at an unreasonable distance from the target. I won’t talk about how I embarrassed myself in front of a bunch of kids. I’ve never been any use at darts anyway.

But I did find the archery intriguing. When the tour guide challenged me a game at half distance, I was happy to accept. Tour guide was a brash young guy by Asian standards and claimed he used to be a very good archer. With a stroke of beginners luck, I managed to hit the bullseye. The game went on a lot longer than it should have, because neither of us could get close to the number of points we needed. Until my fingers had had enough and I declared it a draw. Tour guide was not happy.

I did not prepare at all for my trip to Kathmandu. I didn’t even have local currency for the visa on arrival, the credit card machine didn’t work, and the ATM didn’t work. Not the first time I’ve had to beg and barter with strangers to... Continue →